Thank you for sending this photo! It was so lovely meeting you, Carl and Stephanie. We are so grateful to you for thinking of us and donating your artwork. Your Aunt Aurora's memory will continue to live on in the NOW office in NYC! Activists like you and Aurora inspire us to keep moving forward to advocate for the women and girls of New York and all over the world. 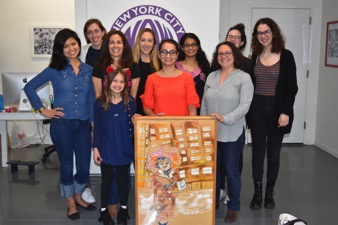 For information on environmentalist AURORA GAREISS go to:

Herbert and Aurora Gareiss were the most compassionate couple you could know.      Not only did "Aunt Aurora" help save the wetlands on Long Island but she and my Uncle  Herbert  both "saved" me.  When my father, Louis Lombardo, abandoned me as a child, they took me in, sent me to school, fed and clothed me as I was alone at 13 years of age with no place to go.  At her memorial in 2000, Commissioner Stern and Senators were among the vast crowd.  With the Pastor saying prayers near the pier on her property, a hugh egret came fllying behind him as if on water skies, flapping his wings with a large splash as if to pay homage to this very kind hearted soul.  Thank you NOW for keeping her memory alive in your office!

Aurora Gareiss with her neice, Didi D'Errico, on the Gareiss property in Douglaston, NY in  the 1960's.

Didi D'Errico's caricature painting, LONE MARCHER, acrylic on paper 2 x 3 ft. of her Aunt, AURORA GAREISS depicting her in her 90's and still marching.  Aurora was a talented artist who painted beautiful scenes of the Wetlands as well as pastel portraits.